Nurses feed newborn babies rescued and brought to Ataturk National Children’s Hospital in Kabul, Afghanistan, on May 15, 2020, after their mothers were killed in an attack on a maternity ward operated by Doctors Without Borders. The health-care nonprofit runs clinics and hospitals in various parts of the country. Wakil Kohsar/AFP via Getty Images hide caption 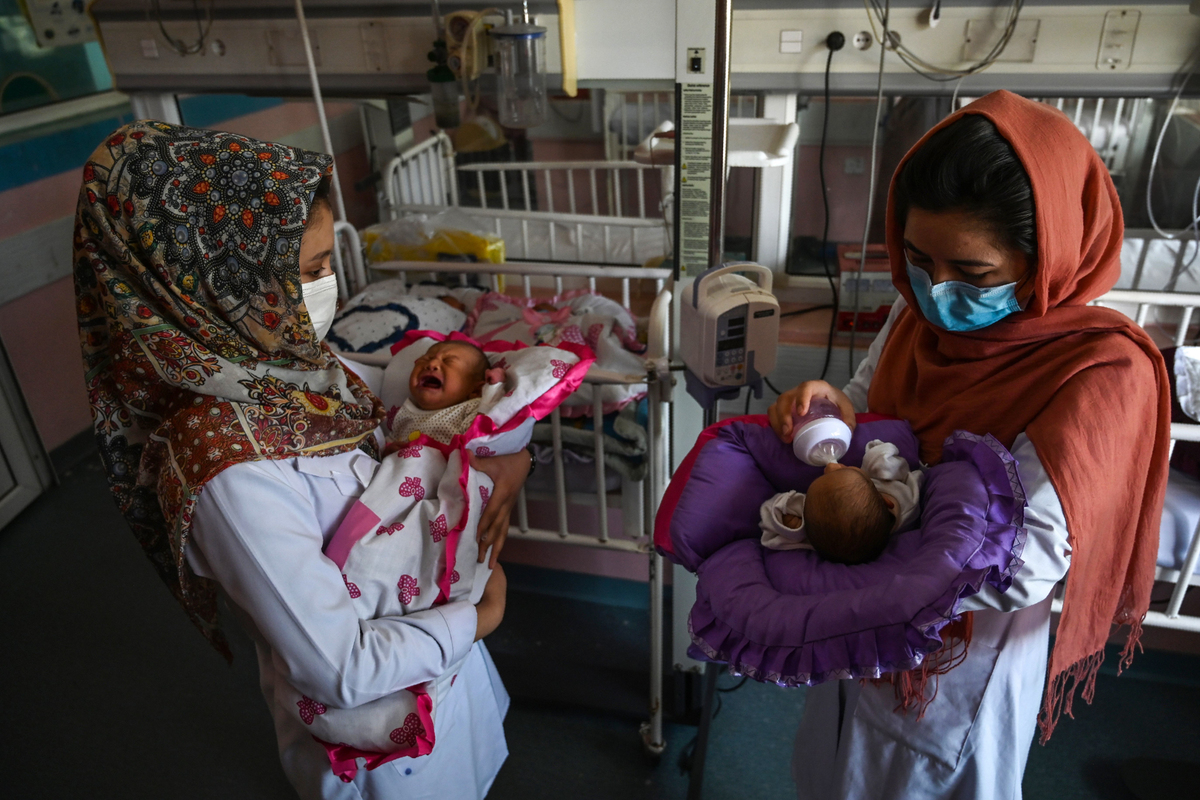 Nurses feed newborn babies rescued and brought to Ataturk National Children’s Hospital in Kabul, Afghanistan, on May 15, 2020, after their mothers were killed in an attack on a maternity ward operated by Doctors Without Borders. The health-care nonprofit runs clinics and hospitals in various parts of the country.

How is Afghanistan’s health system faring amid the Taliban takeover?

To get a perspective, NPR spoke on Thursday with Filipe Ribeiro, the country representative for Doctors Without Borders, to find out where things stand for patients and health workers in the organization’s hospitals and clinics across Afghanistan.

Ribeiro previously spoke to NPR two weeks ago when the Taliban and fighting was just moving into Afghan cities such as Lashkar Gah in southern Afghanistan. Hospitals where teams from Doctors Without Borders (also known as MSF) were working were then reporting a flood of civilian injuries.

Now the country is under a new regime — and hospitals are struggling with new challenges.

This interview has been edited for length and clarity.

Let’s start with the situation in Lashkar Gah. You were describing just a horrific number of challenges there two weeks ago — all kinds of injuries due to bombing, fighting and people unable to reach the hospital. What is happening there now?

Lashkar Gah is much calmer. Peace is back, which is good for the population and good for our team, too. They can have some some rest or at least be less stressed than they were.

A lot of patients are coming back to the hospital. Those who couldn’t access us during the fighting are now showing up. Yesterday alone, we received something like 870 patients in the emergency room. We also have pregnant women coming in. The hospital has 300 beds and it is already full.

One of the big concerns will be the fate of the health system. The population will have more difficulties to access proper medical care.

Is there a functioning health ministry in Afghanistan at the moment that you can work with?

We are in a kind of a limbo, waiting to see who will be in charge. Our [health care] system in Afghanistan was fully dependent on foreign aid. Let’s see if donors will continue supporting the system.

Yes, we do. We did in all of the provinces where we work, from Kunduz to Lashkar Gah to Kandahar to Herat. For the time being, we can work without a problem from the other side. As I said, the transition is ongoing. The [Taliban] administration is not yet fully at work. Let’s see how it goes.

Are the women on your teams able to continue working?

Some of them were obliged to flee because of the fighting. But most of them reported back. For the time being, yes, our female colleagues are able to work.

It sounds like the situation in Lashkar Gah still has many challenges, but it’s better than it was two weeks ago. What about in other places? You have teams in five places around the country, is that right?

We are running a trauma hospital in Kunduz. In Kandahar, it’s a little more challenging because tuberculosis patients couldn’t reach us for quite some time, but we [gave them enough TB drugs] for a couple of months so they can continue their treatment. In Herat, we are seeing an increase in patients coming back to our facilities.

And how about Kabul?

In Kabul, we do not run a project. The airport is still a big mess. But the situation in Kabul itself is calmer.

What’s the situation with COVID? I can’t imagine that vaccination rollouts are in full swing — and I’m not seeing many masks in these pictures coming out of Afghanistan.

People have one hundred problems and COVID is just one of them. We are at the end of the third wave of COVID. The number of cases is dropping. My main concern is the fourth wave. We expect it to happen. No one is prepared to face this wave.

Vaccination was already very limited in the country. COVAX only sent half a million doses. [Afghanistan] did receive some support from India and China with a few millions of doses, but we are far from having what is needed.

And how about the security situation for your teams? We’re obviously all watching heartbreaking images of many people trying to leave Afghanistan. For now, it sounds like you are staying put and are able to operate.

We are able to operate in the different project locations. Everything is so far, so good. One of the big concerns is that the teams are cut off. We cannot reach them by plane. We need to wait and see how the Civil Aviation Authority will function in the coming days or weeks. But security-wise, everything is OK.

The main challenges will very soon be supply. How are we going to get the medicines in? Or get people in and out, or travel around the country?

Just doing things as basic as [getting] a visa, it’s almost impossible for the time being because there is a dysfunctional or nonfunctional administration.

Miguel Macias and Patrick Jarenwattananon produced and edited the broadcast version of this interview. Malaka Gharib adapted it for the web.