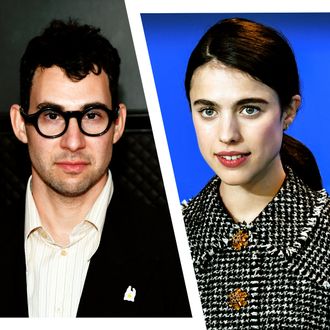 It’s been a busy few weeks for Jack Antonoff, who produced Clairo’s album Sling, which came out mid-July, and Lorde’s album Solar Power, out this Friday, along with releasing his band Bleachers’ third album, Take the Sadness Out of Saturday Night, on July 30. And between it all, Antonoff may have found time to take on yet another project: a relationship with actor Margaret Qualley. “Page Six” reported that the two were spotted making out in New York City on August 14, with photos of their smooches in front of Milk Bar to prove it. The couple themselves haven’t said anything about their relationship, which comes months after Qualley reportedly split from Shia LaBoeuf in January, after his ex FKA twigs claimed he had abused her. (Qualley later thanked twigs for speaking out.) Antonoff, meanwhile, last publicly dated Lena Dunham, before their five-year relationship ended in late 2017. Shortly after, he was rumored to be dating Lorde, owing to their close collaborative relationship on her 2017 album Melodrama; the two have continually denied the rumors, as recently as last week. Maybe this’ll finally be enough to put a stop to it?