Meghan Markle and Kate Middleton’s relationship is improving after a tumultuous year, a source alleged on Wednesday.

“Meghan and Kate are actually getting along really well and have been in touch more often,” a palace insider claimed to Us Weekly. “Meghan and Kate’s relationship was never that close. And now they’re closer than ever and working on their relationship for the sake of the family.”

Back in March, Markle told Oprah Winfrey in a televised interview watched by nearly 50 million people globally that her sister-in-law made her cry ahead of her May 2018 royal wedding to Prince Harry.

Prior to the 40-year-old’s claim, initial reports suggested it was the other way around, with the former American actress allegedly leaving the Duchess of Cambridge in years following a disagreement. 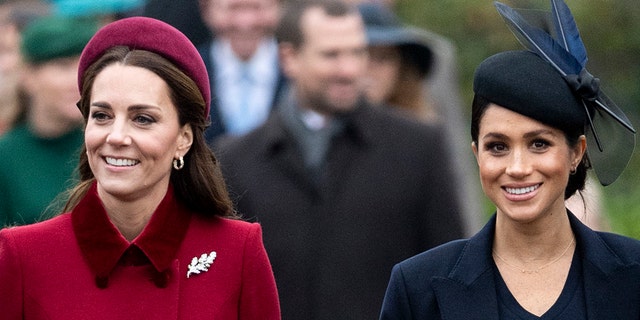 A source alleged that Kate Middleton (left) and Meghan Markle have been on speaking terms following the bombshell tell-all. (Photo by Mark Cuthbert/UK Press via Getty Images)

“The narrative with Kate, it didn’t happen,” Markle told the media mogul. “A few days before the wedding she was upset about flower girl dresses and it made me cry. It really hurt my feelings.”

The Duchess of Sussex insisted that she and Middleton, 39, eventually sorted things out.

“It was a really hard week of the wedding,” Markle explained. “And she was upset about something, but she owned it, and she apologized. And she brought me flowers and a note, apologizing.”

WHAT MEGHAN MARKLE’S HALF-BROTHER THOMAS MARKLE JR. HAS SAID ABOUT THE DUCHESS OF SUSSEX

After the interview aired, a source told the outlet that the women hadn’t spoken in a year partly because of Harry’s ongoing rift with his older brother Prince William. The insider alleged the “animosity” between the brothers made it “very hard for them to be friends or even friendly.”

However, another source later told the outlet that the women made amends and have been in contact since Markle gave birth to her second child in June.

This image provided by Harpo Productions shows Prince Harry, from left, and Meghan, The Duchess of Sussex, in conversation with Oprah Winfrey.  (AP)

“Kate has been reaching out to Meghan a lot more since [Lili] was born, she’s sending [notes and] gifts and trying to build up a relationship,” the insider alleged.

Markle, a former American actress, became the Duchess of Sussex when she married Harry, 36, in May 2018 at Windsor Castle. The couple welcomed a son named Archie Harrison Mountbatten-Windsor in 2019.

The Duke and Duchess of Sussex’s departures from royal duties began in 2020 over what they described as the British media’s intrusions and racist attitudes towards the former “Suits” star. The family now resides in the coastal city of Montecito, Calif.

In the wake of quitting royal duties, they gave an explosive TV interview to Winfrey, 67, in March, in which the couple described painful comments about how dark Archie’s skin might be before his birth. The duchess talked about the intense isolation she felt inside the royal family that led her to contemplate suicide.

The Duke and Duchess of Sussex currently reside in California with their children Archie Harrison and Lilibet Diana. (Getty Images)

Buckingham Palace said the allegations of racism made by the couple were “concerning” and would be addressed privately.

On June 4, the couple welcomed their second child, a daughter named Lilibet “Lili” Diana Mountbatten-Windsor. The child is eighth in line to the British throne.

The name pays tribute to both Harry’s grandmother, Queen Elizabeth II, whose family nickname is Lilibet, and his late mother, Princess Diana.

The Associated Press contributed to this report.